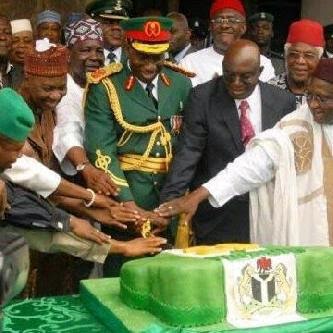 O-oh, Nigeria of lords and swords
My tearful eyes cry like no lords
And my cracking lips vomit vibes
Against the reign and conquest of spites

O-oh, Nigeria of lords and swords
Break not my heart’s breaking cords
I love you, Nigeria, my ancestral land


Dry my tears and sweats with truth’s cooling fan
Posted by Unknown at 07:22 1 comment:

The next day, we were singing the school anthem when the principal sighted Abimbola dancing with fancy-looking earpieces attached to her eardrums. Everyone could see how angry he was. Surely, I thought, he was anticipating the end of the last stanza of our school's song of praise:
Like an eagle soaring high above
We are striving for excellence
That better than no one
We will be useful for our time

At the end of the anthem, he called Abimbola's name and announced immediately that she is suspended for two weeks. He couldn't understand why a student will be listening to music and dancing while on the assembly ground. Besides, the school anthem was being sung. He was the most learned scholar I had seen in my adolescent age. One could search the whole city and perhaps, find no man as knowledgeable as he was. With a rather stern countenance, he addressed us in a long speech of which I remember only the essential point: "Abimbola's punishment is to serve as a deterrent to all erring students. Listen or yours may be expulsion."

The assembly ended and we all marched to our classes. Abimbola followed the principal to his office to receive her letter. I reflected, gloomily, that if Abimbola goes on suspension, the class would be dull and uninteresting. Without knowing what really impelled me, I went to our History teacher, soliciting that he pleads on behalf of Abimbola before the principal. Reluctantly, he accepted. I accompanied him to the principal's office where he asked for clemency and the virtuoso was granted pardon.

"Hi," I said. It was after school. I was trying to engage her in a conversation.

"Hi," she responded, going her own way. She appeared to have forgotten that I was the person standing beside the History teacher when he was requesting for her being exonerated.

"Abimbola," I called her name. "Would you mind if I have a word with you?"

She then stopped, looked at me eyeball to eyeball, smiled and said: "Why not?"

I asked her about her attachment to music and the way she responded ignited the flame of interest in me. Music had been the most consistent relationship of her life. Her parents died before she could tell who they were and she has been staying with her aunt since then. Her aunt, a widow without a child, works as a banker and spent most of her life in the bank. Left alone at home, she plays music, dances and reads her books at intervals. Before she could realize it, she had become inseparable with music. Her life and music became a kind of a perfect chemistry. No doubt, music was the book of her life, and she was reading it on.

We went on talking until the driver came to pick me up. I offered to give her a ride and she accepted it. We continued talking in the car until she alighted in front of their house - a simple bungalow.

"Thank you Enenche," She said.

"I'm glad I could help." I responded. "See you in school tomorrow." I added.

When I reached home, food was prepared as usual. Though my uncle was away, the housemaid did not neglect her tasks. In fact, she was as dutiful as she had always been. What's more, the house was impeccably clean
To be continued...
~~~~~~~~~~~~~~~~~~~~


Three days later, I woke up only to realize that it was the day my uncle was leaving for Jaji. I took a deep breath, darting my eyes around my room, wondering my uncle's departure. That was the moment I knew I will be missing my uncle and closest companion. Just then, a cascade of images cleared my eyes like bright camera flashes and I began to write:

A Note to my Uncle

Give your all to the state
And break terror's plate
It's me, your son
wishing you victory's sun

I put the note on the pocket of his shirt as I shed tears of joyful pain. We embraced each other profusely and he whispered to my ears:

"Enenche, you are not yet what you shall be. Take your studies seriously, behave well and do whatever you like. I love you!"

"I love you too uncle." I responded cheerfully.

I went back into the house as they drove out. I prepared for school, had my breakfast and was about to leave for school when I overheard a conversation. It was between Udokamma and Mr. Bako.

"Mallam, you know what oga said?"

"He said we should do whatever small oga says."

"That one no be wahala now."

"But he said that we should watch small oga's movements."

The house-maid and the gateman went on talking. I was ready to leave for school and didn't want to be late. But their words told me to be careful in my daily affairs. Yes, my uncle trusted me but I needed to conduct myself in order to continue to enjoy his strengthening confidence in me.

The driver drove my uncle to the airport and may not be back so soon. So I entered a bus just in front of my uncle's house. In the bus were other school children with three women, supposedly their parents. While the children were holding tightly their flasks, their mothers were bewailing the state of the nation. Every night, the sounds of bombs, machine guns and cannons leave the people sleepless, with eyes wide open, waiting for the cock to crow. They spoke of the destruction they had witnessed; how they became widows with families to take care of. No one would have imagined that such tragedy could occur in a time so brief.

Before we reached the next turn-up, the driver inserted a CD of Asa. He raises the volume of the Disc Player and sang to our hearing:

Though the women did not appear to be fascinated by the music, I felt enchanted by the lyrics. Music seemed to possess a mystical power, capable of calming our troubled and broken lives. Asa evoked in me a sense of freedom with her dulcet voice. No doubt, the music shortened the journey and made me less worried about the tendency to be late because of the traffic. The bus halted right in front of our school building where I alighted and ran to join the assembly.

After recess, we had History. Entering the classroom, the teacher dropped Irele's The Negritude Moment on his table. While he was teaching, Abimbola caught his attention and that of all of us. Donning an earpiece, she is carried away by Mariah Carey's Hero:

[Chorus:]
And then a hero comes along
With the strength to carry on
And you cast your fears aside
And you know you can survive
So when you feel like hope is gone
Look inside you and be strong
And you'll finally see the truth
That a hero lies in you

Abimbola was miming the lyrics when the class was going on. All eyes were on her but she seemed not to have noticed. She went on to the utter surprise of everybody in the class.

She continued. Her ears were blocked by the rhythm of the soothing song.

This time around, she heard and quickly answered with a sudden sense of fear.

"Yes sir." She stood up, removing the  headphones that were stuck to her ears. The whole class laughed. It was then that it dawned on her that she had long been sighted by everyone.

"I'm sorry." She apologised immediately but the teacher was already inflamed.

"To redeem yourself, you have to render a poem, share a quotation with us or you leave my class and never return." Looking at the teacher, she was dumbfounded before she opted for the first option. The whole class was as silent as silent as the sheeted dead.

"The title of my poem," she began, "is I'm Sorry." She flashed us with a smile as she started:

Indeed, her poem left me mesmerised. It seemed an immortal spirit dwelt in her frail looking body. I sensed from our teacher's countenance that he was impressed. He pardoned her and the class continued. But the passion which the marriage of poetry and music had indelibly brought into her life was undeniable. Her performance in class had been consistently exceptional and her behaviour is characterised by honesty almost to a fault. As soon as school ended for the day, she walked out of the gate as fast as a dislocated joint slipping back into shape. I wanted to see her. I rushed to catch up with her but she had entered a bus. I couldn't call her name for she had gone.

The River of my Heart


The idea of this poem jumped into my consciousness when I was typing a school work. We come into being and go out of being. However, what we do in our life span defines our sojourn on earth. In the lines, I describe the attitude of purpose, consistency and gratitude as we ride through life's convoluted mysteries... 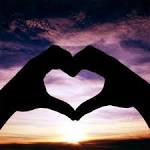 When night comes
And bids me refreshment in sleep
I go to bed
Grateful for the day
Posted by Unknown at 01:48 4 comments:

Welcome
O! Welcome home
Like in Jerusalem and Rome
Let’s make this world a shalom

Email ThisBlogThis!Share to TwitterShare to FacebookShare to Pinterest
Labels: home, shalom, sweet, world
Older Posts Home
Subscribe to: Posts (Atom)
In life,
you will realize
that there is a purpose
for everyone you meet.

While some people will test you,
some will use you
as some will teach you.

Nevertheless,
the ones who bring out the best in you,
respect you
and accept you for who you are
are the ones worth keeping around.
~ Anon.